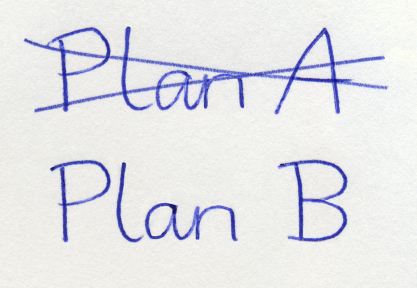 Years ago as we were traveling home from vacation, my wife happened to hear a comment on the radio while we were cutting across the edge of Georgia on our way from Tallahassee, Florida to Dothan, Alabama. She scribbled it down so I could look at it later:"The key to success in life is how well you adapt to Plan B.”There is a world of truth in that simple sentence. So many of us go through life frustrated because we’re still working on Plan A. That’s the one where everything works out, where your marriage lasts forever, where your children grow up without any problems, where you climb to the top of the career ladder, where everyone loves you and no one hates you, where all your dreams come true and you live happily ever after.Unfortunately, Plan A rarely pans out. Life isn’t that simple or that easy. Check out Exodus 13:17-21. When the children of Israel left Egypt, God did not lead them by the shorter coastal route to the Promised Land. Instead, he led them south into the wilderness. No doubt there was some grumbling and murmuring. Why go the long way? Why not take the road that goes along the seashore? Answer: The Philistines lived along the coast and God wanted to spare the Jews from having to fight them and be tempted to return to Egypt. What seemed like a detour turned out to be for their benefit. In this case, Plan B was better.Meanwhile the people who are frustrated by the failure of Plan A are overtaken by the folks who have decided to make Plan B work instead. What’s Plan B? It’s the reality that your divorce is final and your marriage is over. It’s the reality that your first career choice was a mistake and now it’s time to start over. It’s the reality that you don’t have the money to buy the bigger house you want. It’s the truth that you have cancer and your future is uncertain. It’s the truth that some of your children are far from the Lord. It’s the understanding that some people who seemed to be close friends aren’t going to be there for you when you really need them. It’s the reality that your dreams aren’t going to come true, at least not in the way you expected.What will you do now?Here are three suggestions for those who feel a bit overwhelmed by circumstances: First, embrace change as a natural part of life. Solomon says as much when he writes, «There is a time for everything, and a season for every activity under heaven” (Ecclesiastes 3:1). If you live long enough, you’ll eventually see it all–birth and death, war and peace, building up and tearing down, winning and losing, loving and hating. Nothing stays the same. You can fight change, but you can’t stop it.Second, embrace your circumstances and make the best of them. “Whatever your hand finds to do, do it with all your might” (Ecclesiastes 9:10). Life is hard for all of us, but it’s made much harder when we grumble because we don’t like where we are at the moment.Third, embrace the only Person who never changes. "Jesus Christ is the same yesterday, and today and forever.” (Hebrews 13:8) Leaders come and go, friends come and go, our children grow up and leave home, our career takes many twists and turns. But Jesus Christ never changes! He remains the same. He is the one constant in an ever-changing world. Anchor your life in him and you can face the future without fear.Plan A not working out? Don’t give up.
Jesus loves to help Christians who use Plan B to serve him.